Today, the musicians who perform and make music for television shows such as the Tonight Show with Jimmy Fallon, Dancing with the Stars, and Jimmy Kimmel Live! delivered a letter to the entertainment industry’s major television networks demanding fair wages, fair health coverage, and equal residuals for work used on streaming platforms.

After years of attempts to achieve balance and fairness in the broadcast television industry, a majority of the house band musicians, members of the American Federation of Musicians, have signed an “Open Letter to the Networks” calling on Disney/ABC Television, NBCUniversal, CBS Entertainment Group, and ViacomCBS to return to the bargaining table to create true pay parity for the musicians and dismantle the structural racism that still runs rampant in the television industry.

A cultural shift is happening across the globe and consumers are watching and listening. The networks’ shows use Black music and BIPOC (Black, Indigenous, and People of Color) for humor, healing, and processing emotional content. The clips from these shows and music from these programs generate millions of views and tens of millions of dollars in advertising revenue on streaming platforms like Peacock, CBS AllAccess, and Disney+, yet the musicians receive NO residual payment for music that is being monetized and featured on ANY streaming platform. (see infographic)

“TV networks have agreed to make meaningful residual payments and have increased pension and health contributions to singers, actors, writers, and directors when content is made for streaming, but have refused to do so for musicians,” said AFM International President Ray Hair. “It is unconscionable that these wealthy global companies have decided that some digital content creators deserve compensation that reflects the value of their work, but that musicians don’t.”

Historically the musicians’ union (AFM) has been more inclusive of BIPOC members than the other unions inside of the Live TV industry. Unfortunately, this goes hand-in-hand with its members being economically disrespected, undervalued and underpaid in comparison to those of other unions. Systemic racism becomes the status quo regardless of intention or awareness, but now is the time to rewrite this narrative. The #RespectUs campaign asks the television networks to place themselves on the right side of history.

“This campaign is about ALL live television musicians being treated equally and with respect. It’s not just about those of us who are in the TV house bands. There are hundreds of musicians performing on live television on a regular basis, and all of us deserve to be compensated and credited for the work that we do,” said Jonathan Lampley, musician on The Late Show with Stephen Colbert.  “In my own experience, the musicians on The Late Show are mostly Black, and the host/actors predominately white. And yet when we look at the numbers, specifically when it comes to residual payments for work featured on streaming platforms, our union (AFM), which is historically more diverse, is being offered a deal that is considerably less fair than our actor colleagues’ union. We are asking the networks to treat us with fairness and respect.”

American Federation of Musicians members from Los Angeles to New York continue to strengthen a national member-led campaign as they approach the next round of contract negotiations scheduled for this month.

Click here to view the “Open Letter to the Networks” 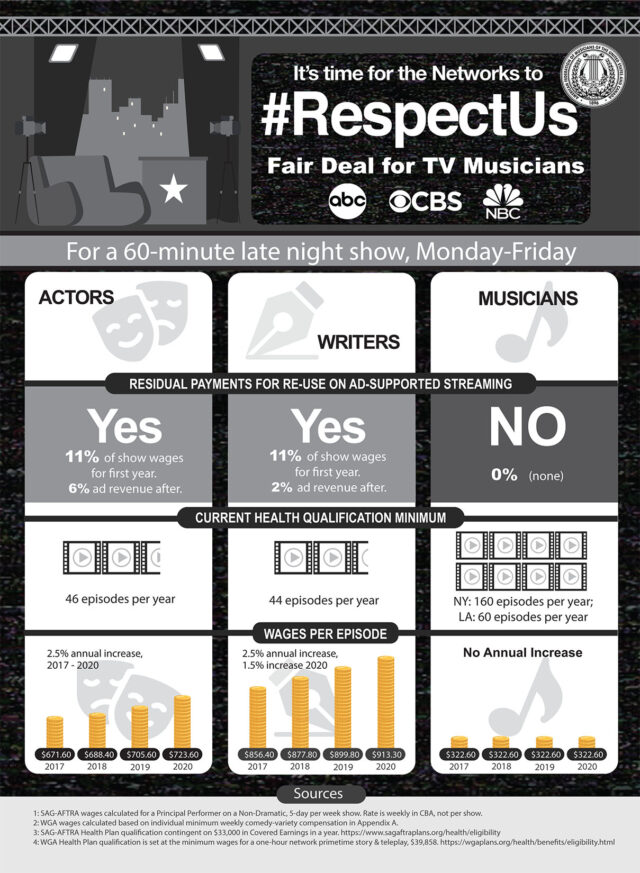