Beginning in the fall of 2016, AFM launched a comprehensive local officer training program. “The organizing and strategic planning training that we present there is critical to how we, as a union, approach growth in both membership and workplace campaigns,” said AFM International Vice President Bruce Fife.

Organizing and strategic planning training is critical to how we, as a union, approach growth in  membership and workplace campaigns.
AFM International Vice President Bruce Fife.

While some trainings focus on nuts-and-bolts content that every local officer needs to succeed, the three-day retreat is geared toward leadership development, organizing fundamentals, identifying local organizing targets, and building musician worker-leaders. 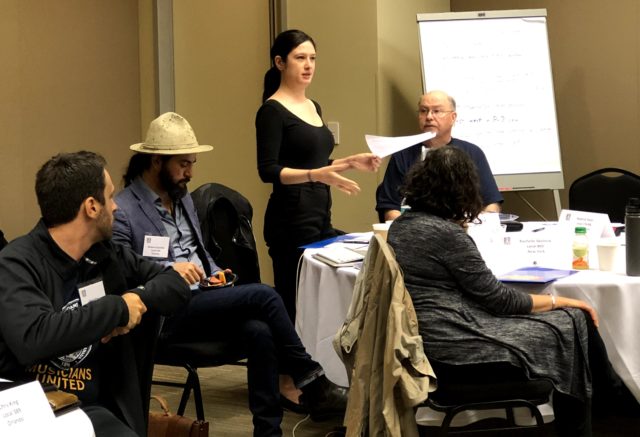 AFM’s Leadership Development Program is centered on organizing with a strong focus on one-on-one organizing conversations. “I learned things I didn’t know I had to learn. Knowing that you have to really get another person’s story to find out what moves them to action—that was great. If we allow workers to tell their story, then get them to face their fears, we can help them motivate themselves into action,” said Orange County Local 7 Vice President Edmund Velasco.

If we allow workers to tell their story, then get them to face their fears, we can help them motivate themselves into action.
Edmund Velasco
Orange County Local 7

AFM Organizing & Education Director Michael Manley explained that, “organizing and building other leaders is really core to being a labor leader. Member apathy or low membership, a plan of attack for a contract campaign or non-union workplace, unionizing freelance musicians and clubs, or a lack of new leaders to take over from retiring officers—ultimately, these are all organizing challenges.”

Issues we face as New Orleans musicians are the same that others are facing; we are not alone in our fight.
Roderick Paulin
New Orleans Local 174-496

Key to the training is that participants identify and craft a plan to tackle a real-world target (including non-union orchestras, theaters, clubs, showrooms, and churches) in their communities.  New Orleans Local 174-496 member Roderick Paulin “realized that the issues we face as New Orleans musicians are the same that others are facing; we are not alone in our fight. I also learned that having an organizing conversation, while challenging, is really the key to moving people to take action. Folks have made a lot of noise in my community about unfair treatment, but making a clear organizing plan showed me how I can truly make an impact locally. I feel much more confident, comfortable, and clear about the work we need to do in New Orleans.”

“What I learned was how to take big organizing projects—which can seem overwhelming—and break them down into winnable chunks,” said Toronto Local 149 Executive Director Michael Murray. After attending the December 2018 training, he realized that his local needed more resources to tackle the important work and brought on two organizers for a theater campaign.

Organizing is how musicians build collective power to win fair treatment and respect in every workplace. “I was really challenged to flip my script, from thanking musicians for paying their dues and completing transactions to a much deeper and transformational conversation,” said Orange County Local 7  Secretary-Treasurer Tammy Noreyko. “It’s changed the way I approach everything I do now!”

It’s changed the way I approach everything I do now!
Tammy Noreyko
Orange County Local 7